Hi my name is… my name is… excuse me, my name is Slim Shady Lisa. You might remember me from the original Jammy Toast and recall my posts. If you don’t then you can catch up on them over here. I have been a friend of Davey’s since about 2003. I used to have a blog on Blogger well before he started to blog and before he discovered his pesky teddy bears. He used to leave comments on my blog and before you knew it, we were chatting away on MSN – who remembers good old MSN? I invited him to write a few guest posts on my blog and we became great friends. I even travelled over to the UK in 2007 from Canada for a visit and we had a whale of a time together. Fast forward sixteen years and I now comment on his blog and he has invited me to write some guest posts for him. As the old saying goes; what goes around, comes around…

Seeing as it is that time of year, I thought I had best tell you of my least favourite moment with boys. He is an old friend from Canada and a few years ago he came down at Christmas just to spend some time with me. He had a few days to spare between doing nothing and ignoring me. Of course, when he arrived, he was as cute as ever and my heart melted.

We went out and had some beer and chatted a little. There was no deep and/or meaningful conversation, no roaring fire, no falling snow or proposals of marriage. There was of course a huge smile on my face and lots of gazing deeply into his eyes. He didn’t have to say or do anything sick and twisted, infatuation is like that I hear.

We came back to mine and made out which led to more which didn’t last very long. Who said true love was good in the sack? Then there was the moment I was waiting for when he proclaimed that he felt bad since he had a “sorta” girlfriend now. I was told before this that he was seeing/dating someone but it was not made clear that it was anything serious.

Of course, he told me this after sex when he was feeling guilty. I told him not to feel bad, being the stupid chick that I am, I told him it was unfinished business between us like a cheque that was written and needed to be cashed. Then in my most girl-like of ways I shed a couple of tears and professed undying love. How I felt bad about our situation how the timing is never right and how he lives too far away. Then I went out and got stinking drunk and ranted to the fates about true love sucking and how it’s just not fair.

It is all over and done with now and I just feel pissed off. I feel like my crush, my so-called love for him was used and abused in the most heinous of ways. He took what I was offering in the most heartfelt of ways and soiled it. It wasn’t just a shag for me I have had lots of those and never felt bad, never felt used until that moment.

I have never just “liked” anyone and I never ever (not counting my drunken wedding day) talk about how much I feel for someone. But this time I did, I had felt this way for a year and a half and seeing him again was like coming home, like I had been away for a few breathless minutes, just enough time to remember how much I missed him so I told him. I told him that I had loved him from the minute that we first met right down to this minute when he was telling me that he shouldn’t have fucked me since he had a girlfriend. I told him that I loved him and always would and if he ever wanted me, I would be there in a minute and he countered with “Nah, you don’t love me”.

I probably didn’t, I agree. I was hyped up on Christmas love dreams tainted by the first-Christmas-alone-blues and a couple of beers on an empty stomach. I guess I should know better by now but anything to do with matters of the heart leaves me feeling like that little girl with her first crush. I should have known better but I didn’t and I still don’t want to.

I’m bitter and crusty enough without becoming jaded as well. 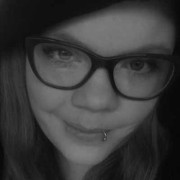