For centuries, life’s big questions have puzzled some of the world’s greatest minds. The need for love, marriage and life-long commitment. The yearning to reproduce and the survival of the human race. The search for a vocation, the desire to find happiness and the inevitable end – death. Karl has never given a seconds thought to any of these issues. Now he’s turned forty he thinks it’s time he did. Jammy Toast have sent him off around the world to see how other people deal with life’s big questions and if these questions are such a big deal anyway.

So, Tony (remember, my turtle friend that I saved from being eaten at a restaurant last month) was loving it in the hotel but I was only there for three days. What was I going to do with him when I left? I couldn’t just leave him swimming lengths in my bath. I started searching the internet for how to look after him or what to do with him so he would be happy. Nothing. Typical of Japan there was loads on how to cook him but nothing on how to look after him. It does make you wonder, the way they eat shit in Japan. Did a meteor wipe out the dinosaurs or did the Japanese just eat them?

Sorry I got involved now. It does make me wonder if this is how people have kids. They just have them by accident and then they are just suddenly in your life. Just like Tony. I didn’t think it would be that much of a headache.

I called the aquariums and they weren’t interested. Called the conservations things, they’re not bothered because turtles are not endangered. I came up with a plan of my own because there is no way I was taking it back to the restaurant. I’ve gone through too much now to turn around.

I am going to set him free.

I spent some time trying to find a suitable place for him and I came up with a fresh-water lake. I thought it was pretty good. Fresh water and shaley which is what it said they like on the internet. I reached down to lift him out of his carry box and he tries to bite me. After everything I have been through to save him and find him a permanent home and that is the thanks I get.

Eventually, I got him out of the box and he was off. He was loving it. He seemed well happy. He dived under the water which is what they like doing and off he went. I hope he was happy but there was a nagging doubt at the back of my mind that he was thinking, “a few hours ago, I was in a five-star hotel!”

Continuing my search around the subject of kids, the next day I went to have my sperm tested. It’s okay all this talking about having kids but if my sperm isn’t up to the job then I might not even be able to. Part of me is hoping my sperm is rubbish then when people ask me, am I not having kids I can just so, “Oh, I can’t. My sperm’s no good!”

One thing I don’t understand is how did I win the race to the egg myself because I am a rubbish swimmer. If I was back in there now, I would be at the back letting the others go first. I really don’t know what was happening in there. Maybe the other sperms were pushing and shoving and I just swam through. Or maybe I just got up early that day and happened to be knocking around the nob exit and I was first out.

I went to the clinic and they tested my sperm and turns out I have more than average and they all swim around all over the place. They are not lazy like me which means they haven’t got all my characteristics. I was looking at a picture of all my sperm swimming around and I thought most people have a picture of their kids in their wallet, I could have this – all 47million of them and they are not even born yet and they can swim better than me. It is something to be proud of.

The doctor said I had the ability to have my own babies but none of this was getting me broody though. Just because I have got good sperm, it doesn’t mean I would be a good dad. It is two totally different things. I mean there are loads of people out there with driving licences but they’re shit at driving.

I asked the doctor what he will do with the rest of my sample and should I take it away with me. He said no it would be sent for disposal. I had to make him double check because I don’t want any little Karl’s running around! 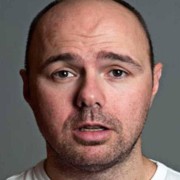 A crotchety cabbie, I am living my life at my aunts, trying to get over a break-up, and simply muddling my way through life. My closest mate being my inner self, who is not shy about speaking his mind, and often lands me right in the shit! In fact, I think life is just put here to try and baffle me…