We always love Radiohead. They make some great music but above everything else they have a Bear Logo (see above). This year they have released their new CD for download from their site and guess how much it costs? The answer is; whatever you want to pay for it. Can you think of anyone else who would have the cheek to do that?

Also on New Years Eve they released a Video on YouTube of them playing all the songs on the new CD for anyone to listen to. Radiohead get The Bears seal of approval and here for anyone who is interested is the whole CD played live by Radiohead at their own studio. Furthermore, it is all perfectly legal for us to broadcast it here! 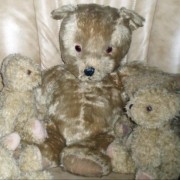 We are the Renault Bears who used to live free in the French Alps but were caught by the Renault Car Company and forced to be companions to small children. Once these children had grown up we were left alone, unwanted and uncared for until... The Bearkeeper came along!