Today is international friendship day so i thought i would tells yas how me && davidd met, ended up as friends && i started writing on jammy toast .. i have already done a story about that but it was yonks ago when i used to write me stories in that wierd andreaesse language .. most of yas probably couldn’t understand a word so i thought i would write the story again but try && do it in me best english so people can understand what am saying .. its like being back at skewl this!! so here is the story of how me && davidd met && got to be mates && how he always bullies me..

One day in skewl me && lorah learnt a new word && was calling everyone a “meff” .. none of us knew wot it meant, i think we heard some older kids using it so we thought we was dead grown up calling each other meffs .. then the teachers started on us sayin that it better not be a swear word or we are in trouble .. so that night when i was at lorahs we googled it to see what it meant && we found this dead wierd blog .. it was called “the queens blog” && there was ananasty who was the queen, chimpton who was the princess && davidd who was the servant .. they ued to do mental things like have squishy tomato fights in the park where they would throw tins of tomatoes at each other .. if ya have ever seen that film ‘one flew over the cuckoos nest’ where the mental patients escape from the mental hospital for the day, well it was like that .. but they used to call themselves ‘the meffs’..

Me && lorah left a comment on their blog asking what a meff was .. davidd replied that a meff was someone who doesnt fit in with normal people .. like when ya at skewl there is always one kid in the class who is the wierd one who always sits in the corner on his own && never wears the right label clothes .. the classic was that meffs always wore reebok classic trainees so that other meffs could recognise them .. me && lorah was wettin ourselves cos there was this girl in our class who always wore reebok classics && we decided she was a meff from then on .. we had the whole skewl skittin at rebook classics && we told davidd wot we had done .. he told us that sales of rebook classics had crashed in kirkby .. i think he was joking but there was a sports direct shop in the towny && the next week they had a sale on for 50% off rebook trainees .. me && lorah was cryin && had to tell davidd about it .. he did a story on the blog about how two kids in kirkby had bankrupted reebok..

That was the start of it .. me && lorah was always on the blog from then on .. we started off showing off && being pure nasty to ananasty who was about the same age as me && lorah .. but instead of being nasty back, davidd just used to laugh at us && take the mick .. he was pure funny && used to make us all laugh about stuff .. then we started chattin on msn && we become mates .. lorah still reckons that davidd taught her cockertoo how to swear!! then me && another girl called linzi started fighting over razzi on the blog to see who was going to marry him .. it was all a joke like but we used to leave nasty comments to each other && sayin that razzi loved me more .. whenever i was bored i used to come && talk to davidd, razzi && linzi .. it would always make me laugh .. it carried on for years && i left skewl && started working in a spoonz pub in liverpool .. by that time davidd had become one of me best mates.

Then it all turned to shit.

I got a boyfriend called liam who was a right knob .. he told me to delete all me lad mates off facebook && stop talking to lads .. i stopped talkin to davidd too like a dick .. i had known him for ages && he had always been dead kind && helped me with alsorts .. he even helped me apply for the job i got at spoonz, it was probably thanks to him that i got it cos i was shit at writing letters, filling in application forms && doing CVs .. davidd did it all for me && i thanked him by ghosting him like a prick!!

But liam was the love of my life && we ended up getting engaged .. i moved in with him && we both used to work && shit .. he was a taxi driver && i worked in spoonz .. at first it was great but then liam started getting jealous of any lad i talked to even people i just worked with .. just so he could keep an eye on me he stopped driving taxis && got a job in spoonz with me .. he was making less money but he wanted to be able to keep an eye on me .. i was working behind the bar && he was working in the kitchens .. i thought it was a bit wierd at the time but carried on anyways .. then he started getting jealous if a customer talked to me or bought me a drink or give me a tip .. it was just wrong.

Then one day this lad come in with a t-shirt on that had a logo for EasyGym .. i was asking him about it && it turns out he was a personal trainer at this gym .. my bum was getting pure fat so i was asking him how much membership was && he was saying, “shut up you dont need a gym you look fine” .. he said it just as liam come out from the back with someones food order .. he started having a go at this lad who was about 6’6 && about the size of arnold swarttersthingy with dead big muscles .. the lad told liam to chill && liam punched him .. it was so funny, it was like watching a little boy hit a man .. liam give him his best shot && the lad never flinched .. then he went to give him another dig && this lad just hit him back once && liam was on the floor crying for his mummy..

Liam got the sack!!

Then i found out i was pregnant && beginning to realise i had made a big mistake .. i had a miscarriage && because i was depressed about that i got pregnant again .. even bigger mistake .. by this time i didnt even know why i was still with liam .. i had only got with him in the first place because he had finished with his bird && i was bored of being single all the time .. we started going out && one thing led to another .. After the miscarriage he said that he didnt want a baby anyway && thought that i was just trying to trap him .. i felt like shit when he said that && i guess i should have just fucked him off but i never .. then i ended up having a breakdown && was in counsellin for 7 months && stopped working in the pub .. life just became so different when i had time to think && started to realise what a knob liam was..

After the second miscarriage liam says to me that he doesnt even know why am so upset cos it wasnt even a real baby because it wasnt born .. he said it was just a miscarriage so whats the point in crying?? all this was on the way home from the hospital .. i called him a tit && said he wasnt even making sense && he just said, “oh fukk off andreaa, ya not even my type!!”

I have never wanted to kill someone so much in my life.

Finally, I left him && went back home to me mum .. liam kept texting me to go back but i was well over him by this time .. i just texted him back && said, “i thought i wasnt your type, so why dont you just fuck off??” He really saw his bum && come round to me mums house && smashed a window to get in, hit me && me mum, then legged it like the brave little boy that he was .. The bizzies arrested him && me && me mum had to go to court && tell them what occurred.

He got 2 years for ABH but the best thing was, i got me life back.

Then i rang davidd crying me eyes out to say sorry for ignoring him && told him what had happened .. he just said, “fukkin hell andreaa, you do know how to pick them!!” he was never funny with me or angry at me for ignoring him he just carried on from where we left off .. of course he was right, i did know how to pick them but at least i had learned my lesson good .. i thought at the time that i have a great family, loads of nieces && nephews so i would stick with them from then on .. there was no hurry, i can wait for someone to come along who is nice && kind && we can build a sound relationship before i start thinking about having babies.

As ya can see readin this, there is never a dull moment in my life .. but for once, i just wanted to write this && say a big thank you to that fat cunt davidd .. i never show me feelings to anyone .. ive never said thank you to him for just being there for me && for always being a great mate even when i blow him out .. i always ring him on the way home from work if i have had a shit day && he listens to all me troubles without complaining, even when he’s watching the cricket on the telly .. most of all he is just there for me when i need someone.

Davidd, if ya reading this you can fuck off, its a forgery i never wrote it.

PS. When i finished writing this i emailed it to davidd for him to see what he thinks and he text me back sayin it was like the story of when shrek met donkey. i couldnt stop laughing for ten minutes!! 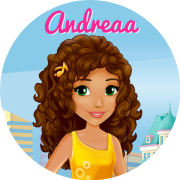 I am Andreaa Kurby && I am havin' a boss time here writing on da Blog && that 'coz Davidd is proper gettin' too old to write && it's doin' me wig in .. I feel proper ashamed for him da fukin' state .. Davidd told me to write yas little stories about me life but I said no, I can't write stories. I never even passed me GCSE English .. But he bullies me yerno, so me stories are usually shite ..