This is my thumb, it does not go straight which has always brought Dad and I much mirth!
Dad has told me for years that he adopted me fresh off the boat from Vietnam, brought me home from Birkenhead Docks where my boat was tied up and raised me as his own. If you stop and think about it, you can’t help but consider that as quite a romantic little story. They could even make it into a film, perhaps? I have imagined that Dad took one look at me and that my little orphan self, melted his heart. What he hadn’t told me, until last week, was that I was actually the last one left on the boat waiting to be adopted and, as such, there was nobody else he could have chosen. I was basically the runt of the litter.

For many years now, I have had all kinds of ailments which Dad has put down to me leaving a hot climate and coming to live in a cold and damp Birkenhell. My joints and muscles ache, I am clumsy and can be very accident prone. I am forever crashing into things and ending up with ungainly bruises. However, recently it has been getting worse. I used to be able to take my bicycle on a fifty-mile ride but recently I get out of breath climbing my stairs and am incapable of even washing my own hair. I also have what Dad and I call, Shaky Jake Syndrome. It is where sometimes my hands will just not co-operate with what I want them to do. Then it started to get worse and I found myself dropping things and I have burnt myself several times on the cooker.

For some time, I have been back and forth to the GP just to get fobbed off. I just wasn’t getting any answers from my useless GP surgery despite seeing different doctors and even changing practise a few times. I was getting awful headaches and migraines and was living like a vampire bat in a darkened room but still the GP wasn’t interested in helping me. To make matters worse, with Covid-19, I could no longer get face-to-face appointments with a GP because I wasn’t deemed important enough. Face-to-face are for emergencies only, I was informed.

I decided it was time to take the plunge and finally get some answers for what is wrong with me. Dad already had a room at the old-folks home on standby for me as it was getting more and more difficult to simply look after myself. I rang a private hospital and asked for their advice. It is amazing how when you are parting with money, the doctors will see you in record time. I was given a face-to-face appointment the very next day. Not only that, but I was referred to a consultant two days later.

I was treated with dignity and not like a piece of shit on someone’s shoe. Dr George looked like a Weeble the way he walked in but was very knowledgeable and asked me what I thought were some right weird questions.

“Can you from standing place the palms of your hands on the floor?” Yep!

“Can your thumb touch your forearm?” Yea I can do that too.

He looked at me and says, “You know that’s not right don’t you? You are not meant to be able to do that.” No, I didn’t know that.

He then asks have I ever done gymnastics? No.

I then lay down and he bent my legs, knees and feet all over the place. At one point my leg was over my shoulder!

I just shrugged. I have always been able to do that. I am very bendy.

He explained that ‘normal’ people can only bend their legs around 40-45 degrees but I can get mine to 120 degrees or more which he says is not good. He then bent my hands at the wrist so that it was parallel to my arm and showed me how his wrist will not bend anywhere near as far. He sat me down and explained I have a condition known as ‘Ehlers Danlos Syndrome’ which apparently is usually diagnosed when you are younger. Some of the more pleasant symptoms are velvet soft skin and fewer wrinkles. Apparently, I age slower than most people too due to the way I produce collagen, which again is weird. Dad has always said I look uncannily young for my age, bruise easily, have muscular issues and some not so nice issues. So now Dad has re-christened me Chimpton Button (named after the film The Curious Case of Benjamin Button, who grows younger). He says I am age reversing!

Dr George also went on to diagnose me with a mouthful of other syndromes which I will not bore you with. Unfortunately, there are no cures and it makes me a little sad that I have had to go back on the NHS waiting list which means I have to once again do battle with my GP’s Surgery over my treatment.

So, if there are any pay-pigs out there wanting to help me out, give Dad a shout. I’m hoping they offer me weed as a pain killer instead of all the pharmaceuticals I’m currently taking but I won’t hold my breath.

So as Dad said, he had to adopt me because I was the only one left at the docks.

I would literally be asking for a refund, if I were him. 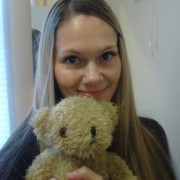 A small Chimpton who looks after Eddie Bear and his friends and family who also loves riding her bicycle out in the big wide world. An animal lover who has a passion for anything skin, anti-ageing, beauty or vintage related. She is also a MEFF!

71 Comments on “The Curious Case Of Chimpton Button”