Ilooked out of the window at number 52 Festive Road and all I could see were children and their parents all walking to the park. I followed to find out why. There is a magic show at the park, I discover, and as I watch the display I think of a certain shop not far away I would like to visit. In the costume shop I found a starry, glittery costume and the shopkeeper appeared and invited me to try it on to see how well it fits.

As I step out of the changing room, I find myself in a cavern packed with shelves from floor to ceiling and on every shelf is crammed books, jars, packets and other intriguing sundry. I studying a book called “Useful Spells” when in walk two men from the Palace.

They have been sent to find a wizard – will I go with them?

I was happy to oblige and soon we were all clip-clopping our way through lovely countryside in a horse-drawn carriage. People wave as we pass and everyone looks remarkably happy: “Oh they are happy,” said my companions. “Our King is a good King, everybody loves him.”

At the Palace, I was led into the great hall where many worried people are gathered. At the head of the hall sat a King and Queen. The Queen is an impressive stately woman. The King is a short happy man. This is a problem as the Queen sees it, the King is just not regal enough for a start, he is too placid: “He should jump about more.”

Could I cast a spell to make this happen?

I consulted my book, saying the appropriate spell, waved a magic wand and sure enough the King begins to jump about all over the floor, rather like a frog. “Stop!” commands the Queen. That isn’t what she had in mind at all. I quickly found the spell to reverse the charm.

The Queen explained that the problem is that the King should be bigger and stronger. I say the relevant spell and the King begins to grow big, too big for the chair, and strong – he gives a soldier a gentle pat and a whole line of them fall over like dominoes. “Stop!” shouts the Queen. Again, I say the words and wave my wand to reverse the spell.

Perhaps strong is not right, suggests the Queen, but a King should certainly be tall and elegant, and she orders me to make him so. I read the spell for height and elegance and the King begins to grow and grow. The Queen calls out stop just before her King reaches the ceiling, and I reverse the spell again.

Exasperated, the Queen tries to make the King more statuesque. But, of course, he turns into stone. She tries to explain to me that she… but I cut her short. “Things cannot be changed to and fro forever,” I say and I refuse to cast another spell. The Queen begs me to work one more charm, to reverse the spell and bring the King back to normal: “It’s not important how he looks, I realise that now.”

I reverse the spell and the Queen and crowd rejoice. The King smiles and thanks me.

Back in the shop I change into my normal clothes and thank the shopkeeper. “I liked that King,” I said, “I’m glad he wasn’t changed.”

“Thanks to you, Sir,” says the shopkeeper.

As I walk home to 52 Festive Road nothing has changed here in this cheerful, ordinary street. 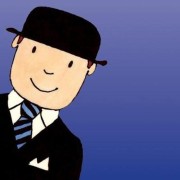 Mr Benn is a normal bowler hat-wearing gentleman who lives in an ordinary residential street in London. Every day he visits a costume shop where he meets the shopkeeper who, as if by magic, sends him off on another exciting adventure. Mr Benn is now a cult phenomenon appearing first in books and later as the star of a BBC television series in the 1970s.

42 Comments on “Wishing For Change”